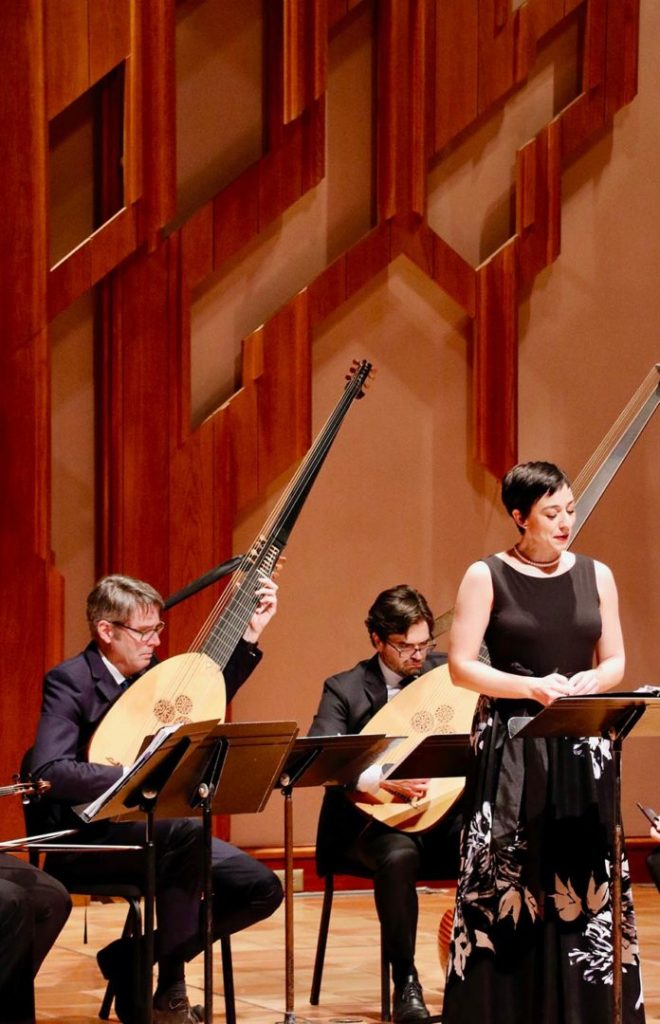 One of the country’s most distinguished period ensembles, Pittsburgh-based Chatham Baroque, has been regaling St. Matthew’s Music Guild audiences with a treasure trove of early music gems for more than a decade.

During that time, the core ensemble of Andrew Fouts (baroque violin), Patricia Halverson (bass viol) and Scott Pauley (theorbo), along with a host of guest artists, has offered up baroque music from locales as distant as Spain, South America and Russia.

Their concert on Jan. 19, “Awake Sweet Love: Songs and Suites of Olde England,” was a potpourri of music from England’s 17th and 18th centuries, including everything from lyrical dramatic arias to bawdy drinking songs and lively dance tunes. Fouts, Halverson and Pauley were joined by soprano Pascale Beaudin, violinist Cynthia Black, bass viol player David Morris, and David Walker on theorbo and baroque guitar.

Chatham Baroque specializes in playing on instruments either built during the baroque era or modern replicas. Although the violins used by Fouts and Black look very much like their modern counterparts, some of the other instruments used by the group have no modern equivalent.

The theorbo is a type of lute with several bass strings stretched across a neck that can measure up to three-and-a-half feet long; the bass viol, also known as bass viola da gamba—gamba being of the legs—looks to be a cross between a cello and a guitar (with its frets made of sheep gut) but it is held between the player’s legs and knees, as opposed to a modern cello, which uses the assistance of an “end pin” to hold it in place.

All this makes for a very different sonic experience than normally encountered—generally the instruments are softer, with a very delicate sound that is capable of great subtlety and nuance.

The centerpieces of both halves of the program were Royal Consort “setts” (suites) by William Lawes that featured the two sonorous bass viols plus two violins and two theorbos.

Born in 1602, Lawes was a child prodigy and childhood friend of the future King Charles I.

They both learned to play the bass viol as children and remained friends after Charles became king. Lawes was appointed to a prestigious royal post by the king whom he served until he was shot by anti-Royalists at the outbreak of the English Civil War.

The “setts” are collections of dance pieces, ranging from the elegant French pavan to the lively Italian corant, German alman and even a completely British morriss.

The charming dances were played elegantly, and one was delighted to find such expert and nuanced interplay between bowed instruments, which frequently played off of each other in lively and delicate points of imitation.

The eyes and the ear we’re delighted by the sight of such ungainly instruments being handled so gracefully. (The presence of two theorbos is something of a rarity as Pauley Pointed out in his remarks in which he referred to David Walker as his “theor-bro.”)

French-Canadian soprano Beaudin, who is proud of her Acadian heritage, is equally comfortable in the recital hall and the opera house.

She offered up the selection of airs by Henry Purcell, as well as folksong settings by contemporaries of Purcell and Lawes. Purcell wrote a number of masques (a form of English opera), including the “Fairy Queen,” adapted from Shakespeare’s “A Midsummer Night’s Dream.” Beaudin’s performance of “The Plaint” was one of many highlights.

The mournful text (“O let me weep/My eyes no more shall welcome Sleep”) is set to a heart-wrenchingly beautiful melody over a repeating bass line and simple chord pattern. Beaudin’s clear voice and subtle phrasing, coupled with crisp pronunciation and a beautiful stage presence kept the audience riveted and breathless: one could hear a pin drop.

Countering music for a royal court and elegant theatrical works, Baroque added a bit of fun in the form of lively numbers, including “Ground After the Scotch Humor” by Italian import Nicola Matteis’ and a traditional drinking song, “Mother Watkin’s Ale.”

Corá is a performer, educator and former board member of Early Music America. He is a graduate of Indiana University’s prestigious Early Music Institute.