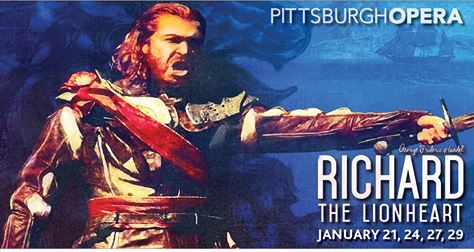 Pittsburgh in the Round
January 23, 2017
George B. Parous

Pittsburgh Opera’s Resident Artist Program unveiled its first production of the season last night at the CAPA Theater – Georg Frideric Händel’s largely neglected Richard the Lionheart. Händel composed the music to an Italian language libretto by Paolo Antonio Rolli, and as Riccardo primo, re d’Inghilterra (“Richard the First, King of England”), it premiered at the King’s Theater, London, in November 1727. After an initial run of a dozen performances, and a couple of productions in Germany around the same time, the work fell into oblivion, until the opera was rediscovered by the Händel Opera Society and performed by the Sadler’s Wells Opera in London in 1964. Revivals since that time have been scarce, and the work was not heard in the United States until Opera Theatre of Saint Louis produced it in the summer of 2015. Pittsburgh Opera’s production marks the second time the work has been heard in America, so to call it a rarity here is not an understatement. It’s also not an understatement to say that there have been less than a handful of occasions over the decades when I was completely captivated by an opera on a first hearing and that Saturday night was one of them.

The lyric stage of Händel’s era was quite a different place from the one that would produce so many well-known “grand opera” standards a century and more later. His was the age of the castrato and what would later come to be referred to as the opera seria, musical works with the stories used primarily as hooks on which to hang as many arias as possible that displayed the virtuosity of the famous singers of the day. The castrato singer is mercifully a thing of the past, but roles written for this voice range can today quite easily and effectively be assumed by counter-tenors or mezzo-sopranos. The Anglicized title of Richard the Lionheart is used for this production, although it is sung in the original Italian (with English surtitles projected above the stage), and the title role is portrayed by mezzo-soprano Leah de Gruyl. The auditorium of the CAPA Theater holds about 400, and not many of the seats were empty – they should all be full for the remaining performances, for the production in many ways excelled any given to date this season at the Benedum, which holds about three thousand.

The plot (which received just a glance in our preview), as briefly as possible, takes place in Cyprus about 1190 and centers around King Richard’s upcoming marriage to the Spanish princess, Costanza, who has been shipwrecked with her entourage on her voyage to meet her future husband. She is sheltered by a governor, Isacio, whose daughter Pulcheria is betrothed to Oronte, a Syrian prince. Both men are attracted to Costanza, to the point where the father is willing to send his own daughter to Richard as a bride in Costanza’s place so that he may keep her for himself. He reveals his plot to Pulcheria, who wants no part of the fraud, but sees it as an opportunity to free herself from an unfaithful fiancé. Costanza and her servant, Berardo, suspect that all is far from being right, and Berardo sets off to find the truth.

The King, disguised as an ambassador, arrives to collect his bride, and Pulcheria presents herself as Costanza. But Berardo has uncovered Isacio’s treachery and passes the information to Oronte, who in turn is more than happy to tell all to the now furious Richard. The King is determined to return to England with the real Costanza or avenge himself by force. He presents Isacio with a choice, and the latter chooses war. Richard defeats his forces, and Pulcheria, now reconciled with Oronte, is named ruler in her father’s place. The opera comes to a happy ending as King Richard and Costanza are united.

Michael Beattie conducted, the orchestra being augmented by a few period instruments and players from Chatham Baroque. It wasn’t until the beginning of the third act that he unassumingly popped his face up from the orchestra pit, and the resounding ovation he received was well deserved. Mr. Beattie has dropped in on a couple of occasions in the past when “Baroque” was the bill, and an excellent conductor of the genre he is indeed. The orchestra played smoothly and strongly throughout, a solid column of lovely sound that was a symphony in itself, without once drowning the powerfully voiced singers. Any lover of Händel’s orchestral writing and Mr. Beattie’s masterful interpretation of it should not miss this production.

The opera is impressively mounted, with the costumes rich and becoming, the stage settings necessarily minimalistic but for the most part effective and quite colorful. The thick fog of the third act was especially impressive but was probably intended to roll off to the wings, rather than fall straight into the orchestra pit.

To catalog the merits of the individual singers would require a volume, so a few words about each will have to suffice. Probably the best thing that can be said of last night’s cast as an ensemble is that Pittsburgh Opera’s Resident Artist Program contains voices that equal and/or excel those of many of the famous singers who are paid small fortunes to come here from time to time, sometimes to “deliver the goods,” but sometimes to rest on the laurels they have won in New York and elsewhere. An astonishing amount of vocal talent was on the CAPA stage Saturday night, and the weeks of rehearsals to bring out the best of Händel and his vocal writing paid off brilliantly.

Shannon Jennings (Costanza) was a vision and sang treacherously difficult music with what seemed to be the greatest of ease and with a voice of beautiful quality and quantity. She displayed amazing breath control and acted the part with sympathetic dignity. Much the same may be said of Claudia Rosenthal (Pulcheria). What a treat (and relief) it was to hear such sustained soprano singing; pure, clear, unmarred by a tremolo or similar tricks (although these would be totally out of place in Händel), and she infused her acting of the part with the few subtle traces of comic relief the opera allows quite effectively. She, too, achieved resounding success in her role, and like Ms. Jennings, was received by the audience with great enthusiasm.

Newcomer Taylor Raven, mezzo-soprano, sang and acted the male role of Oronte quite well. Her performance aroused interest in her upcoming appearance in As One next month. Leah de Gruyl, in the title role, gave a very impressive interpretation of the King. Regal in bearing and heavily disguised in effective make-up and costuming, her dark-hued mezzo-soprano voice proved quite capable of negotiating the tricky vocal writing of the title part. The ovation she received was well warranted.

Men sing only two of the male characters. Brian Vu (Berardo), heard several times in smaller roles, sang more in this production, and his strong baritone of fine quality was well worth the wait. He acted the part of Costanza’s devoted servant correctly and effectively. Likewise, bass Andy Berry was given his largest opportunity to date as the conniving Isacio, and his voice and acting fit the part well.

As a whole, Richard the Lionheart is one of the best productions Christopher Hahn and the Pittsburgh Opera have offered, and lovers of music, well performed, are highly encouraged not to miss this treat.