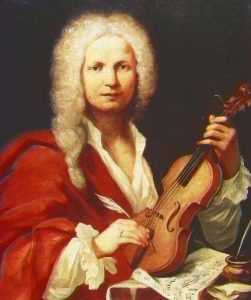 Antonio Vivaldi (1678-1741) was the most original and influential Italian composer of his generation. He laid the foundations for the mature Baroque concerto. His contributions to musical style, violin technique and the practice of orchestration were substantial, and he was a pioneer of orchestral program music. He learned the violin at an early age, and became revered as a violinist in his own lifetime. In September 1703 Vivaldi obtained his first official post, becoming maestro di violino at the Pio Ospedale della Pietà, one of four Venetian institutions devoted to the care of orphaned, abandoned and impoverished children and specializing in the musical training of those among the girls who showed aptitude. He composed many pieces to be performed by the girls at the Ospedale. In his later career, he traveled throughout Central Europe passing away in Vienna.

His notable works include “The Four Seasons” suite, his opera Orlando Furioso, and his Gloria for choir and orchestra.