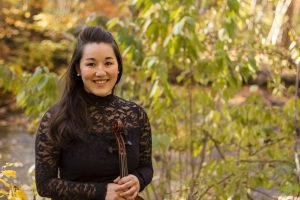 Cynthia Keiko Black was born in Dallas, Texas, and has since made her home in the Bay Area. She performs both as a violinist and violist playing music from several centuries across the United States. She is a founding member of the Costanoan Trio, a a period instrument piano trio, and recently joined Incantare, an ensemble of violins and sackbuts. This concert season, she appears with the American Bach Soloists, the Carmel Bach Festival, Chatham Baroque, the Atlanta Baroque Orchestra, Ars Minerva, and the Washington Cathedral Baroque Orchestra. She can be heard on recordings with Apollo’s Fire, the American Bach Soloists, and the Queen’s Rebels, and will be releasing an album of rarely heard duos for violin and viola from the late eighteenth century later this year.

Amidst an active performing career, Cynthia teaches a studio of young people at the Crowden Schoolís Community Program in Berkeley. She holds modern viola degrees from the Cleveland Institute of Music and completed a doctorate in Historical Performance Practice from Case Western Reserve University. In her free time, Cynthia enjoys cooking and baking, watercoloring, and growing vegetables. She is a proud resident of Richmond, California where she lives with her trumpet-playing, harpsichord-building husband, Dominic Favia.