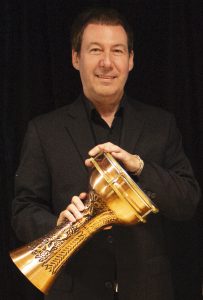 Danny Mallon holds Bachelor and Master of Music degrees in classical orchestral percussion from the Mannes College of Music in NYC, where he has been a faculty member since 1991. In addition to three recordings with Chatham Baroque on the Dorian label, he can also be heard on Piffaro’s Dorian recording. He has recently recorded with the Baltimore Consort, Brio and on Ronn McFarlane’s solo recording on the Dorian, Sono Luminus label.

Danny has also recorded and played the music of Alla Borzova with the Da Capo Chamber Players, and has recorded two CD’s and performed numerous concerts and radio broadcasts with the Charleston Pro Musica. They toured the South of France five times and were the subject of a PBS documentary that aired in March 2002. Danny is an active freelancer, recording spots for TV, radio, film scores and playing all styles of music with artists such as Woody Mann, Liza Minnelli, Phobe Snow, Randy Brecker, Anne Hampton Callaway, Michael Feinstein, Gene Bertoncini, Tom Harrell, Richard Barrone and the Johnny Rodgers band.

His festival appearances include Spoleto, the Berkeley Early Music Festival, the Madison Early Music Festival, the International Festival of Latin American Renaissance and Baroque Music in Bolivia, the Festival of Baroque Music in San Louis Potosi, Mexico, and at Case Western Reserve University in Cleveland. These festival performances were with acclaimed ensembles: Chatham Baroque, The Cleveland Baroque Orchestra, The Baltimore Consort, Quartetto Brio, Piffaro, and the Charleston Pro Musica. At Spoleto, Danny has had four highly praised solo percussion recitals as well.