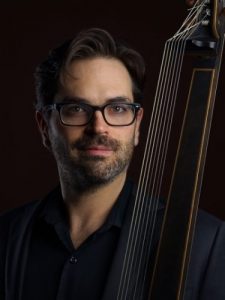 Lutenist and guitarist David Walker has performed extensively throughout the United States earning praise for his “surety of technique and expressive elegance,” (Columbus Dispatch) as well as his “tremendous dexterity and careful control” (Bloomington Herald Times). David has appeared with such ensembles as Boston Baroque, Chatham Baroque, Clarion Music Society, the Smithsonian Chamber Players, and Tempesta di Mare, and is a member of the chamber ensemble Ostraka. He has performed in numerous baroque opera productions, including engagements with Glimmerglass Opera and the Wolf Trap Opera Company. Festival highlights include the Savannah Music Festival, Indianapolis Early Music Festival, and solo recitals for the Bloomington Early Music Festival and the University of Louisville Guitar Festival. Recording credits include Ostraka’s critically acclaimed debut, Division, and Grammy-nominated recordings for Linn Records and Sono Luminus.