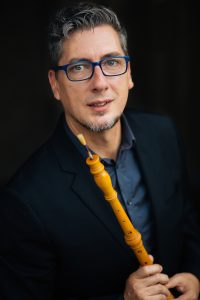 Geoffrey Burgess has played Baroque oboe around the globe for over thirty years. A key figure in the early-instrument revival in Australia, and for twenty years a member of Les Arts Florissants in Paris, Geoffrey appears regularly with the Washington Bach Consort, Philadelphia Bach Festival, Concert Royal, and Boston Early Music Festival Ensemble. Burgess is also an active scholar, with a PhD on French Baroque opera from Cornell University, and the award-winning study The Oboe, written in collaboration with Bruce Haynes. He is currently preparing two books: Well-Tempered Recorders: Friedrich von Huene and the Making of Early Music in a New World and an edition of Bruce Haynes’ Nachlass, The Pathetick Musician. His solo recordings include music of the Bach Family, contemporary commissions and classical chamber music with the Cambini Wind Quintet. Dr Burgess has taught at Stony Brook, Duke and Columbia Universities, as well as on the faculties of the Oberlin, Longy and Amherst Baroque academies, and is currently Baroque Oboe Instructor at the Eastman School of Music.