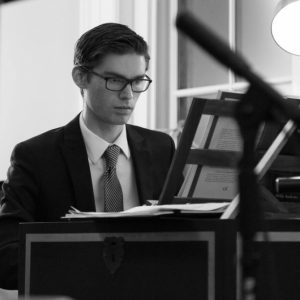 Justin M. Wallace is a harpsichordist, organist and composer based in Pittsburgh.

He has made appearances as a harpsichordist with Chatham Baroque, Quantum Theatre and Pittsburgh Camerata, and is a founding member of the mezzo-soprano/harpsichord duo Musica Mundana. His continuo work has taken him to festivals in Charleston, SC and Quito, Ecuador. He has studied under or participated in masterclasses with William Porter, Arthur Haas, Webb Wiggins, Lisa Crawford, Joseph Gascho, Jean-Luc Ho and Blandine Verlet, and has received guidance from builders such as Keith Hill, Barbara Wolf and John Phillips.

Justin has been the Assistant Organist at Shadyside Presbyterian Church since 2013 where he can be heard accompanying the chancel choir on Sundays.

Justin holds degrees from Baldwin-Wallace Conservatory and the Eastman School of Music. A native of Akron, Ohio, he has lived in Pittsburgh since 2010.