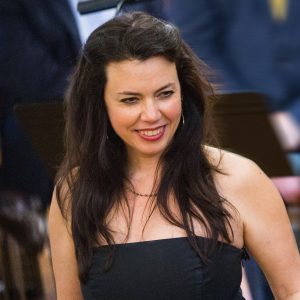 Nell Snaidas has been praised by the New York Times for her “beautiful soprano voice, superb sense of line” and “vocally ravishing” performances. Her voice has also been described as “remarkably pure with glints of rich sensuality” (Vancouver Sun); and she has been called “a model of luminous timbre and emotional intensity” (Cleveland Plain Dealer).

A graduate of the Mannes College of Music Nell began her professional career while still in school, singing leading roles in zarzuelas at New York City’s Repertorio Español. Now an accomplished interpreter of Baroque Music, her renditions of the music of the Italy and Spain have taken her all over Europe and North America, where she has been a featured soloist in numerous festivals, operas and concert halls including Lincoln Center Summerfest, Alice Tully, Town Hall, Regensburg Tage/Alter Musik Fest, Internacional Festival de la Zarzuela in Mexico, and L’Internazionale  Festivale di Scarlatti in Sicily. Operatic performances include “Lisetta” in Gli Equivoci nel Sembiante at the Teatro Garibaldi in Palermo, “Despina” in Mozart’s Cosi fan tutte at Caramoor with the Orchestra of St. Luke and “Valletto” in Monteverdi’s L’Incoronazione di Poppea with Festival Vancouver under the direction of Stephen Stubbs/Paul O’Dette.

Favorite projects include creating the role “Princess Olga” in the world-premiere of the Boston Early Music Festival’s production of the Baroque opera Boris Goudenow at the Cutler Majestic Theater and Tanglewood, giving recitals throughout Italy of Italian and Spanish Baroque music with Ex Umbris, touring Canterine Romane with lutenist Paul O’Dette and Tragicomedia, singing John Adams’ Grand Pianola Music with the Los Angeles Philharmonic at the Hollywood Bowl, and sharing the bill with The Buena Vista Social Club on a tour of Mexico with her own all-female Baroque ensemble, reconstruction.

Nell Snaidas starred internationally as “Christine” in The Phantom of the Opera, has been seen on Broadway in Hair and On the 20th Century and can be heard in Mel Brooks’ movie-musical, The Producers. Her voice is also featured several Emmy-Nominated movie sountracks for the Hallmark channel.

Recent projects include a return to the Boston Early Music Festival to play the part of Amore in L’Incoronazione di Poppea and give a lecture recital on the laments of Luigi Rossi with Erin Headley and Grant Herreid. The ’09-’10 Season includes a tour of the acclaimed Apollo’s Fire concert “Mediterranean Nights” featuring Nell and Biritsh Baroque Dancer/Guitarist Steven Player, recitals with Richard Stone, lutenist, Aston Magna, Tragicomedia and Sinfonia NY. Ms. Snaidas has recorded for Sony Classical, Dorian, and Sefarad, as well as the Grammy-nominated cast album of Hair on Razor & Tie, and various selections of Operetta on Naxos with the Vienna Chamber Orchestra. Recently she was featured on CBC as one of the leading interpreters of Spanish Renaissance/Sephardic song.