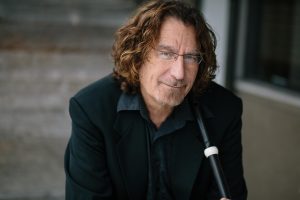 Stephen Schultz, called “among the most flawless artists on the Baroque flute” by the San Jose Mercury News and “flute extraordinaire” by the New Jersey Star-Ledger, plays solo and Principal flute with Philharmonia Baroque Orchestra, Musica Angelica, the Carmel Bach Festival, and Bach Collegium San Diego. He has also performed with other leading Early music groups such as Tafelmusik Baroque Orchestra, Apollo’s Fire, Portland Baroque Orchestra, Wiener Akademie, Chatham Baroque, Cantata Collective, and at the Oregon Bach Festival. Concert tours have taken him throughout Europe and North and South America with featured appearances at the Musikverein in Vienna, Walt Disney Concert Hall in Los Angeles, Royal Albert Hall in London, Concertgebouw in Amsterdam, Teatro Colón in Buenos Aires, Carnegie Hall, and the Library of Congress.

A graduate of the Royal Conservatory of Music in Holland, Schultz also holds several degrees from the California Institute of the Arts and the California State University of San Francisco. Currently he teaches Music History at Carnegie Mellon university and is director of the Carnegie Mellon Baroque Ensemble. Mr. Schultz has also been a featured faculty member of the Jeanne Baxtresser International Flute Master Class at Carnegie Mellon University and has taught at the Juilliard School and the International Baroque Institute at Longy School of Music.

In 1986, Mr. Schultz founded the original instrument ensemble American Baroque. This unique group brings together some of America’s most accomplished and exciting baroque instrumentalists, with the purpose of defining a new, modern genre for historical instruments. The group’s adventurous programs combine 18th-century music with new works, composed for the group through collaborations and commissions from American composers.

As solo, chamber, and orchestral player, Schultz appears on over sixty recordings for such labels as Dorian, Naxos, Harmonia Mundi USA, Music and Arts, Centaur, NCA, and New Albion. Schultz has produced and edited forty CDs for his colleagues and has also performed and recorded with world music groups such as D’CuCKOO and Haunted By Waters, using his electronically processed Baroque flute to develop alternative sounds that are unique to his instrument. He has been very active in commissioning new music written for his instrument and in 1998, Carolyn Yarnell wrote 10/18 for solo, processed Baroque Flute and dedicated it to Mr. Schultz. The Pittsburgh composer Nancy Galbraith wrote  Traverso Mistico, which is scored for electric Baroque flute, solo cello, and chamber orchestra. It was given its world premiere at Carnegie Mellon University in April 2006 and this highly successful collaboration was followed in 2008 with Galbraith’s Night Train, Other Sun in 2009, Effervescent Air in 2012, Dancing Through Time in 2016, Rustic Breezes 2018, and Transcendental Shifts in 2019.

In March 2018, Stephen released a highly acclaimed CD of Bach Sonatas for Flute and Harpsichord with Jory Vinikour, on the Music and Arts label. Their new recording of Couperin’s Concerts Royaux was just released in August 2021 and has made the best seller list of Classical music on Billboard.